Birds Wiki
Register
Don't have an account?
Sign In
Advertisement
in: Bird Species, Birds, Birds of Europe,
and 13 more

The Common Blackbird (Turdus merula) is a common sight in Europe and North Africa, whereas back in the 19th century, they were a rare bird to see in gardens.

Common Blackbirds measure an average 25 cm (9.8 in) in length, weigh 80-100 g (2.8-3.5 oz), and have a 34-38 cm (13.3-14.9 in) wingspan. They have rounded wings and relatively long tails. Male Common Blackbirds are extremely easy birds to recognize, with a plumage of striking black, and a yellow beak and eye rings. Young males in their first year of life have dark brown primary feathers. The females, on the other hand, are a rather drab brown, with a darker beak - contrary to their name. They are usually lighter and mottled on the throat and chest. Both sexes have dark brown legs. Juvenile Blackbirds have a heavily mottled warm brown plumage, darker above and lighter below. Leucistic individuals aren't rare, though most only have a few white feathers.

Blackbirds are noisy birds that make a variety of trills and whistles. Male Blackbirds are known for their loud, melodious, flute-like song, which they sing from high places such as trees or rooftops. Calls include various chirps and clacking sounds, similar to a European Robin's, often heard at dusk. The alarm call is a loud metallic trill.

Generally the males are talented songsters. Blackbirds are not often, if ever, seen in large flocks, however, couples are sometimes seen together. Towards the end of autumn, whilst north European birds migrate southwest, central European ones generally remain on their breeding grounds.

Blackbirds are omnivorous birds that feed primarily on worms, insects, and other small invertebrates in spring and summer, switching to berries and fruit in autumn and winter. Caterpillars are an important food source during the breeding season. They forage mostly on the ground, hunting for prey in the grass and in the dead leaves, and often cock their heads to one side to listen for earthworms moving underground. Blackbirds are often seen out just after rain, as this is a time when many snails, worms, and even slugs, are around, all three of which are part of the blackbirds diet.

The breeding season begins in early spring, around the month of March, and lasts until late summer. Each Blackbird pair usually raises 2-4 broods per year. The cup-shaped nest, built almost exclusively by the female, is typically located low in a tree or in a bush. The clutch consists of 4-5 brown-freckled, greenish-blue eggs which are incubated mostly by the female for a period of about 13 days. Both parents feed the young, which fledge about two weeks after hatching, and continue to take care of them and protect them fiercely for a while after they've left their nest.

The Common Blackbird's range includes most of Europe (except for the northernmost parts of Scandinavia), parts of northern Africa, the Middle East, and central Asia. It was also introduced in New Zealand and southeast Australia. Originally a forest species, the Common Blackbird started colonizing urban gardens and parks about 150 years ago. Nowadays, Blackbirds are a very common sight in European cities, along with Sparrows and Pigeons. 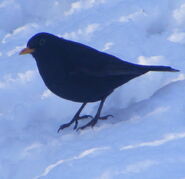 Male in the snow.

A Blackbird perched on a telephone line.

Male looking for prey on the muddy ground.

Blackbirds frequently sunbathe in this position, with their wings spread. This is followed by preening.
Community content is available under CC-BY-SA unless otherwise noted.
Advertisement